Last night was a great duel between a team that is seemingly coasting through the NBA season constantly looking for challengers that dare to answer the bell.

Sometimes, you just can’t win the fight, but moral victories do not go to the wayside after a game like this one in Miami, especially for Hassan Whiteside.

Coming out of the All-Star break on their 4th game in less than a week on a road trip to Miami the Warriors saw themselves thrown into a game where they willed their way to a win.

Ultimately in the end the Heat had no answer for the NBA’s 2 greatest shooters combining for 75 points in the Warriors win. However, if you were to just look a the box score then you;d think that the Warriors were just starting to feel this road trip in terms of the margin they won by, but it was so much more than that.

The Heat kept it neck and neck throughout the contest and relied on their full team effort to try and get themselves a win that would give them a surge of momentum going forward. The Heat had just come off a 3 game winning streak and looked ready to squeeze a win from the Warriors.

That was until Steph Curry turned the difficulty to rookie and shot from anywhere, over anyone until you couldn’t handle anymore.

The Heat lost this game, but they still have a reason to take pride in this loss aa each player defined exactly what it means to “step up”. Coming into this season the Heat were considered a team in the East that could give the Cavs problems once April arrives. Unfortunately the Heat have dealt with various injuries that has left guys in and out of the lineups from night to night.

One player in particular has caught the attention of alot of people and looks to be growing into a dominant player as the season progresses. Hassan Whiteside does things for the team that compliments Dwayne Wades post-prime game, Luol Deng’s veteran skills and the young players the Heat have added.

The Heat are in a position that it is doubtful they will make a playoff run, and with a Kevin Durant free agency looming perhaps the Heat start really preparing their future.

The Heat do need to decide very quickly on where they are with Whiteside as the criticism continues. He’s a worker, he goes out every night and “leaves it on the floor” and yet sometimes his immaturity can let him down. The keywords here are young and talented, and for a player like Whiteside, Miami is exactly where he should be. 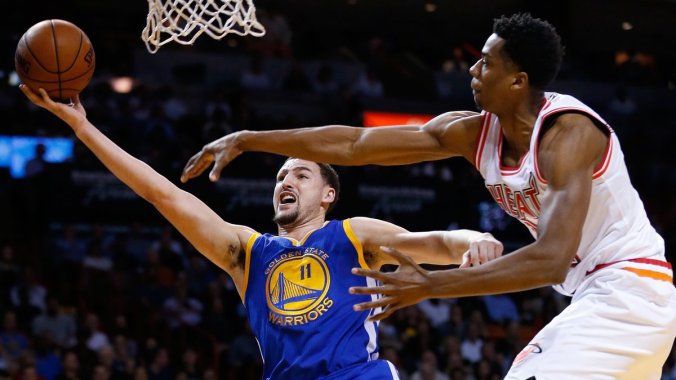 Last night, Whiteside showed out and it may have taken a Warriors game to get a larger audience to notice him.

The NBA’s young talent is promising and exciting and Whiteside is not just another wait and see.

We may need to wait, but its clear to see whats possible.