The NBA season has finished and at least for the Eastern Conference it took all 82 games to decide the fate of the 7th and 8th seed. With that now finalised, it’s time to look ahead to the Playoffs and try to predict even though history will continue to prove that we really don’t know what can happen. This year more than any other, the East has begun to feel less and less predictable posing the question – are we starting to see a new generation of teams on the rise?

From what I remember prior to the start of the 2016-2017 season, the Pacers were projected to be a playoff team by a fair amount of NBA media. However, as the Pacers started the season in rather mediocre fashion, rather than them turning it around they seemed to never really find a formula to begin a winning streak. Since the All-Star break, Paul George has been incredible after multiple complaints towards his teammates by questioning their competitive fight it appears that he has taken it upon himself to will the team in hopes that perhaps those around him will follow.

All of this has culminated in the Pacers just barely making it into the playoffs as the 8th seed in the East and will have a first-round meeting with the Cleveland Cavaliers and quite honestly this is about as far as it’ll go. The Pacers have been better in the second half of the season, but at this point it may be all to late as they choose to rely on Paul George possibly going to another gear. That reliability alone is worth a maximum of 2 wins for Indiana, but anything more than that would be assuming too much of the Pacers and some serious doubt in the Cavaliers. Personally I’m not quite ready to make that leap yet for Indiana, but as far as entertainment value goes this one should be a nice start in the East. 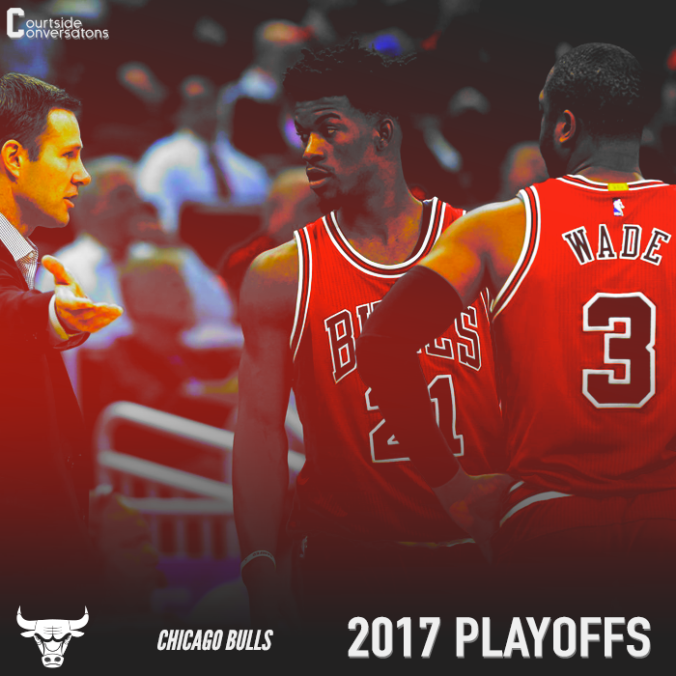 Chicago’s acquisitions this year were interesting to say the very least but still didn’t place enough confidence in people to grant them a playoff position and where most thought a team such as Detroit would finish, the Bulls managed to sneak in instead. Much like the Pacers, the Eastern Conference has a weird way of granting mediocre teams a place in the bottom end of the playoff seedings – and so here we are.

The Bulls gave up playoff game-changer Taj Gibson in a deal that also shipped off Doug McDermott and in return received 3 players from the Thunder who have little to no playoff experience. However, the Bulls do boast a starting lineup that if they can channel their “TNT Thursday night” mode then they could pose some difficulty to Boston. The likelihood of this happening is slim in my opinion due to their unpredictability throughout the season. If the “Future is bright” title goes to the Minnesota Timberwolves in the West then the Bucks are the bizarro-world team in the East. FINALLY! The Milwaukee Bucks are relevant again and enjoying success that hasn’t been felt since Ray Allen was a young buck (pun totally intended).

Unfortunately for the Bucks, I don’t see them coming out of the first-round and honestly would have felt better about there chances against the likes of the Wizards. The Raptors are the much better team and have only been stronger since their trade acquisitions which will be a tough battle for the Bucks throughout this series. The positives however are that Milwaukee will gain the ever so valuable “playoff experience” which is something I like to hold over playoff teams in gauging their success. Without this key ingredient the Bucks won’t see the second-round but instead will give the fans and themselves positive reinforcement going into next season.

Atlanta has somehow managed to get into the playoffs and I’m not going to try to understand why. In a season where they took a flyer on Dwight Howard was it with the hope that he might return to his days of Orlando Magic Dwight? Besides Dwight the Hawks did manage to keep Paul Millsap after a trade deadline where he was on the table then quickly taken off which leads to questions regarding the Hawks ability to resign him after this season. Even further down the roster we still see Kent Bazemore, Thabo Sefolosha, Dennis Shcroder and some late bloomers in Tim Hardaway Jr. for example.

Once I start listing the Hawks roster its actually not hard to see how they went under the radar and landed at 5th in the East and if there second half of the season accounts for anything then they appear to be rolling at a good time. Again with all that said the Hawks could still go completely left or completely right in terms of actually winning this series – catch a unprepared Wizards team or just simply have a crazy game where the Hawks are clicking at every position – an upset is not out of the question. 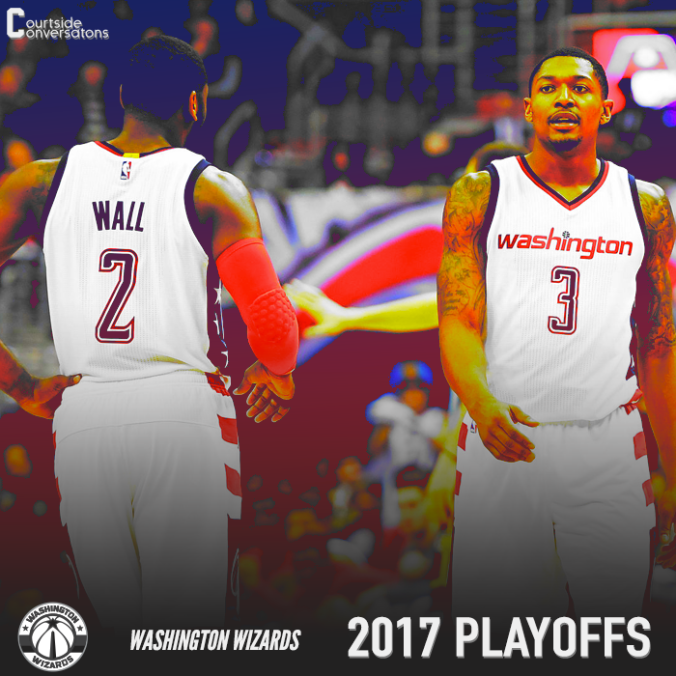 Unlike Atlanta the Wizards were not as unexpected to make playoffs but finally met expectations after years of falling short and also a hit of the injury bug. It’s time to forget all of that for Wizards loyalists and this year has been incredible if you’ve stuck with the team for this long. John Wall cemented himself as one of the top 5 point guards in the league for the foreseeable future and matched with Bradley Beal who is yet to even scratch the surface of his overall potential – it’s safe to say that this backcourt isn’t even close to hitting its full gear and they’ve definitely shown some fight this year.

The Wizards were very close to meeting with the Bucks in the first-round but due to the close records in the East they’ve been gifted the Hawks so that we don’t overload ourselves in the first week of the playoffs. The Wizards have shown enough this year to lead me to believe that they’ll handle business against the Hawks – hungry for victory and an absolute gunner in John Wall, it doesn’t seem they’ll be slowing down anytime soon.

The closer we get to the start of the playoffs the more the Raptors become the team that looks like they could crush a lot of hearts in either Cleveland, Boston or Washington this year. I’ve had doubts about Toronto since last years playoffs where even their birth into the Eastern Conference Finals didn’t convince me. Mainly because of how they managed to get there – I didn’t like how they allowed both Indiana and Miami to take them to 7 games in both round before then.

This year however, DeRozan has shown me some incredible improvement after his trip with Team USA. He started off the 2016-2017 season averaging almost close to 30+ points and looked to be having a MVP candidate season. Lowry and DeRozan had appeared to take on a new attitude heading into this season, but it was their moves at this seasons trade deadline that have now looked to be the factor that could change it all. The Raptors went out and took Serge Ibaka from the Magic and did a sneaky deal with Phoenix to acquire veteran P.J. Tucker. Go down the roster and you’ll see promise in their rookie Normal Powell and experienced guard Cory Joseph and suddenly you’ll see why this year is primed for a Raptors power move.

It’s never easy to keep this short and whenever LeBron James is involved in playoff talks the resume speaks for itself year after year. The defending champs have had a very weird 2016-2017 as they quickly established themselves as the top team in the East.

As we now know though, the Cavaliers last 46 games have put alot of doubt into the heads of fans and media around the league. The champs went on an abysmal 23-23 record to finish the season and have fallen of a cliff with their defense, which is something that can’t be turned around so quickly in the playoffs if it isn’t already there. While it doesn’t look like the first-round is where the Cavaliers will face adversity, the deeper they go is where they’ll be tested. If you ask LeBron James, he’ll tell you that he thrives in adversity and will forever have the saying “If you get me close in the 4th quarter, I’ll find a way to win it for us”.

The Celtics have had one of the most entertaining seasons and have given their fans a rather quick turnaround from the days of KG, Truth, Rondo and Ray Allen. The driving force in all of this has obviously been Isaiah Thomas who almost cracked into the top 5 voting for MVP this season. Thomas took the Celtics into some of the most entertaining games this season with some of the best 4th quarter performances the league has seen in a while.

The Celtics have continuously challenged the Cavaliers supremacy over the Eastern Conference all season and in the end they won out and captured the top seed. After the Cavaliers continued to drop games after the All-Star break the Celtics continued to run teams right until the end. With 2 seperate paths to the Eastern Conference Finals the Celtics definitely have the harder path to earn, but if they can find their way through the second-round their place at the top will be hard to deny.