The NBA Playoffs only started a week ago and its opening series kicked off the festivities with the Cleveland Cavaliers against the Indiana Pacers at Quicken Loans Arena. Heading into the series the tale of the 2 teams was one that lead by LeBron James ended the season as the 2 seed and a questionable defense as well as a poor record after the All-Star break. The other was a Pacers team that boasted some young and some veteran talent that only just managed to punch a playoff ticket after being in a triple-threat season finish with both the Chicago Bulls and Miami Heat. 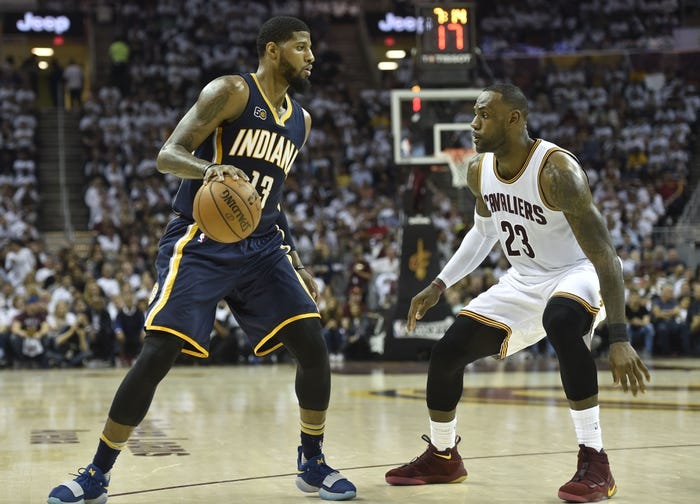 The first game of this series couldn’t have been scripted any better as it kicked off the playoffs with a highly intense game full of offense but not a whole lot of defense. The game was definitely one of LeBron’s “feel it out” games as Cleveland’s defensive switched remained off for the majority of this game when neither team really gained a large lead (biggest lead was Cavs by 12) throughout the game.

The Pacers had the Cavs notably beat in Rebounds (41 | 34), FT% (85.0 | 51.9) and 3P% (45.8 | 39.3) which you’d think would be enough to get a win and that was almost true until the game started to wind down in the final minutes. The Cavaliers racked up 2 baskets in the final minutes and with 40 seconds left George willed a 3 pointer at the top to bring the Pacers within 1 with a chance to win it if they could get a stop. The Pacers defense held the Cavs off but instead of playing the clock the Pacers called timeout to advance the ball. In the final sequence the Cavs doubled Paul George between half court and the 3-point line as he dished the ball off to an open CJ Miles who with the clock at around 4 seconds left and got a great look at a game winning shot.

Of course in the aftermath, Paul George was unsatisfied with his teammates decision and made it clear that it should have been his shot to take, a comment met with much scrutiny and a possible alienating of his teammates. If the Pacers were going to win any game in this first round then this was it.

In the second home game for the Cavaliers it was clear that they had figured out how to handle the Pacers continuing to attack Jeff Teague and keeping Myles Turner out of the game statistically. The Cavs big 3 was the story of Game 2 and did so by dominating in almost every way finishing with 37 (Irving), 27 (Love) and 25 (James).

Indiana definitely didn’t concede this game by any means, but after the second quarter it was all Cleveland from then on working their way to a 19 point lead towards the end of the third quarter. Paul George tried to lead the charge with 32p/7a/8r but it was too little too late as they put on a huge 33 point 4th quarter, but with the Cavs determination not to have a repeat of Game 1 sealed the win.

With the Pacers returning back home the final scores of the first 2 games still gave Indiana a chance to pick up a win and where better to do so than at home. For the first 2 quarter that seemed to be true as the Pacers started to build a lead on the Cavs that started towards the end of the 1st and didn’t end until they were up by 26 in the 3rd quarter.

As we all learned once again, when you’ve got LeBron James on your team even a 26 point lead can be erased and after all it’s only the biggest playoff deficit that has been erased in NBA history. That historic comeback now adds the Cleveland Cavaliers and it wouldn’t have been possible without yet another historic performance from James who lead the charge in the 2nd half with 28p/7r/6a with head coach Tyronn Lue deciding to sit both Love and Irving late in the game. This was simply LeBron flexing his playoff accolades and adding the Pacers to his resume and not because he necessarily had to, but because he can.

In the final game of the Pacers season Paul George’s stat line would suggest that his mind was somewhere else than on the playoffs and on the other side the Cavs duo of LeBron James and Kyrie Irving gave Cleveland a combined 61 points. James capped off a historic Game 3 by adding to his first round record of 21 straight first round game wins with the sweep of the Pacers as the Cavs now await the winner of the Toronto Raptors vs. Milwaukee Bucks series.