One of the most dynamic duo of superstars the league has ever seen in Russell Westbrook and Kevin Durant has been something marvelled at by fans and NBA media alike. The combination of an explosive and freaky athletic point/shooting combo guard and an MVP leading scoring monster, if that doesn’t scream NBA championship then what else does?

Coming into this season, something that has been echoed since the Thunders departure from the 2012 NBA Finals has never been chanted more as we continue to watch this team underachieve. This year is also Durant’s free agency and questions and rumours have swirled around the team for the last 2 years.

So is it time for a break-up? 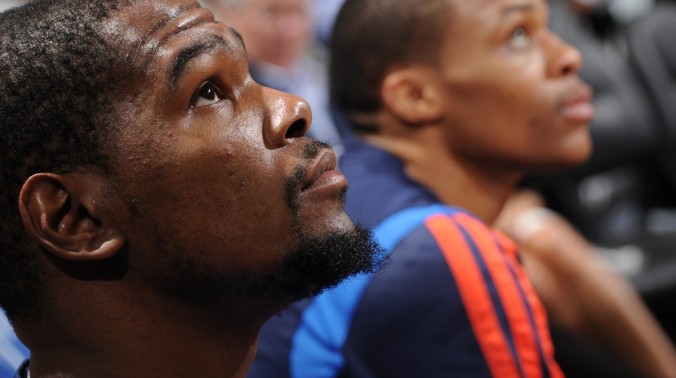 We all know how the last couple of years have gone for the Thunder and by no means does this go unnoticed and forgotten. Soon after the Finals in 2012 after a tough loss from a very hungry LeBron lead Miami Heat team, it was clear the team took the loss hard and it took time to battle back from. Soon after, the Thunder would begin losing players left and right for the next few years as well as a rapid change in line-ups, coach and rosters, then of course you can add on some crucial injuries to both Westbrook and Durant.

However, throughout all of that the question still remained, and it was based on the thought that this year would be their year, after making some roster additions last year that this team would finally be able to take it back to 2012 and achieve.

So far, this year is right where they are every year, top 5 seeded in the west and winning when they want to or when the opposition can’t outscore Durant and Westbrook. Recently, the Thunder have exited a great All-Star Weekend on a negative note. The thing is this didn’t just start at a game on Saturday night against the champs.

I don’t want to give people the wrong idea here, but I’m going to avoid the good and dive straight into the bad with no regard. When the Thunder find themselves in close games, they’ve either succeeded spectacularly or fallen flat on their face. This has never been more exposed than in the last 3 games the Thunder have played this week.

Minus the game breakdown, the Thunder have played great basketball for 3 quarters only to fall flat on their faces in the last quarter. The collapse has shown itself twice now and it doesn’t look good, and it is only increasing the talk from the outside about one of the NBA’s best duo’s.

Westbrook could be going through a phase right now, but his performance in crunch time so far has been either something great (see Orlando form earlier this season) or it leaves you scratching your head and wondering if thats really Westbrook in that OKC uniform. Even Durant cannot dodge criticism, his turnovers in the 4th quarter have also left alot of questions on peoples minds, but does all this have more to do with the load that Durant and Westbrook have to carry?

But its easy to blame on of them or both, I’d rather rip the entire roster apart just as much however. Anthony Morrow was suppose to be the sharpshooter that OKC would need desperately to share some scoring with, and yet so far this year we just don’t see it and instead his talents of cheerleading have overshadowed his NBA game. Dion Waiters has been atrocious since being thrown out of Cleveland, and while he can score, he needs to be having a good night to be remotely effective. Regardless, this team has not been pieced together well and while the GM can draft ’em, he sure can’t pick ’em.

This is just one part of the problem, and the Thunder have promised changes for years now and If Durant isn’t looking at what’s going on around him, then he’s got some good blinders on. After 9 years of service to the franchise/s of Seattle and OKC, perhaps theres no reason for Durant not to look around the league this summer?