The Warriors started their playoff campaign with a lot of excitement as they got Kevin Durant back for the last few games of the season after suffering a MCL sprain just over a month ago. The Warriors had also just gone on a winning streak without Durant that erased all doubt that they’d be ready for the playoffs and even encounter any trouble with the Portland Trailblazers.

Both the Blazers and Pacers must have had the same attitude going into their Game 1 as the Blazers gave the Warriors an offensive barrage form tip-off. Usually when a team has their two best players score 78 points combined you would think they’d have escaped Oracle with a win. However, this isn’t the regular season and this isn’t just any other NBA team as the Warriors took the Blazers backcourt bombs with relative ease as they entered the 3rd quarter.

The Warriors have developed some staple on-court behaviour and one of those include becoming an unstoppable force in the 3rd quarter. For whatever reason if the Warriors are down heading into the 3rd you better have your shit together because if not then the result of this game is what you’ll continuously find.

Game 2 was a defensive showcase by the Warriors and it was all lead by potentially the Defensive Player of the Year Draymond Green. In a game were Portland lead once in the first quarter the Warriors put a stop to that by the end of the quarter and never let the Trailblazers back in.

With Kevin Durant sitting out with calf soreness, the Warriors backcourt wasn’t overly impressive and frankly they didn’t need to be. Draymond lead the Warriors with his double-double game of 12 rebounds and 10 assists while getting double digit scoring from Javale Mcgee, Zaza Pachulia and Ian Clark. After Portland guards Lillard and McCollum dropped 78 points in Game 1 the Warriors suffocated them defensively to just 23 combined points in Game 2.

The Blazers once again got off to a great start against the Warriors and maintained a lead that reached as high as 17 as far as the 3rd quarter. Once again though we were all witness to a Golden State 3rd quarter awakening and with Kevin Durant out for a second consecutive game it was Curry, Thompson and Igoudala that made the difference.

The Warriors outscored the Blazers 65 – 46 in the second half on the scoring output of 48 points combined from Curry (19) , Thompson (17) and Igoudala (12) that just crushed the Blazers who had cleared Jusuf Nurkic to play although didn’t receive quite the game changing performance he’d shown since being traded to Portland during the regular season. 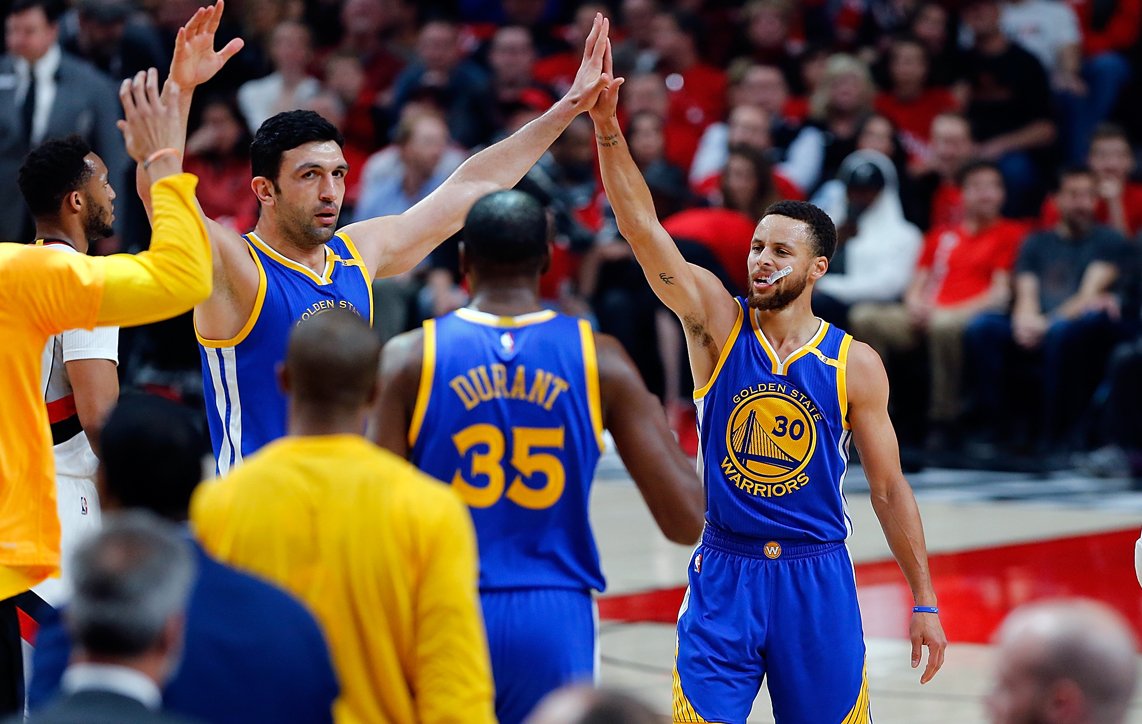 The Warriors definitely weren’t perceived to be in a 7 game series with the Trailblazers at any point and by the end of Game 4 it was even tougher to see any of the Warriors series going to 7 in the future. Golden State started Game 4 in a way that made it feel like the Blazers had 3 players on the court or perhaps the NBA had just adopted the park rule of “you score you get the ball back”.

The Warriors jumped on the Blazers with a 45 point 1st quarter to the Blazers 22 first quarter points were the lead grew as large as 33 points. When Durant, Curry, Green and Thompson shoot 17 of 26 from the 3-point line its going to be a long night and Portland certainly conceded very quickly after the first quarter and honestly they didn’t have any choice but to do so. This game taught a very cruel lesson and its one that unfortunately made a very likeable Blazers team an example of what the Warriors can do when their offense and defense are synced to a level that is unbeatable beyond soul-crushing.