It’s become a novelty year after year for basketball fans to try and predict the next big college star. Sometimes, if not more than most, our predictions are met with disappointment as our elected “future star” fails to live up to the high expectations upon entering the NBA.

For the the past 2 years, I’ve really been into college basketball and can honestly say that after seeing countless stories of the “NBA Bust” it’s clear now why the drop off can be so shocking to NBA fans who perhaps don’t watch as much of the college game.

I don’t proclaim to be an expert by any means, the real experts are the NBA general managers that job’s depend on scouting and finding young talent for their respective franchises. One player however has peaked my interest as well as my hopes for what they may evolve into as they enter this years NBA Draft.

I’m not about to tell you that Lonzo Ball is going to be the next Steph Curry and I’m not going to try to convince you that I can recite the player profiles of every college athlete in the United States – lets face it, I wouldn’t be a blog writer if I could. Lonzo (as he will be referred to from this point on) has currently built a cache during his short time at UCLA that has people (reputable people) giving the vibe that they are very positive about his professional career going forward.

By now you’ve probably seen a few highlight videos of Lonzo and yet I’ll bet you remain unfazed by a college kid at one of college basketballs bigger programs. However, if you aren’t getting your fix from the NBA, then I highly suggest catching a UCLA game and prepare yourself for one hell of an entertaining game.

Heres a great selection of games, most notably UCLA vs. Kentucky

As unconventional as they come is the best way to describe Lonzo’s shooting motion, but the common saying that seems to be rolling off announcers and basketball media is the cliche “If it ain’t broke, don’t fix it”.

His shot is only one part of his game and so far it hasn’t shown to be a huge problem when you consider his offensive game collectively. Even with the unorthodox shooting style, Lonzo has incredible speed that gives him the ability to completely burn past defenders even twice his size. Until his recent game against Arizona I hadn’t seen Lonzo take a mid-range shot, but it appears he does have the capability even if he doesn’t feel the need to use it.

Due to the low maintenance vibe Lonzo gives off when it comes to scoring, it raises the question of not whether he can or not, but rather does the team in which he plays with warrant him to score 20+ in every game.

Unlike his younger brothers, Lonzo is in a system where he isn’t seen as the only talent on the team (or at least the self-belief he’s the most talented), so much so that his points per game don’t quite match the hype he receives. This however is the stat that can be overlooked when evaluating the overall game Lonzo displays every game and does so in a system where he isn’t asked or relied on to carry the team in scoring. 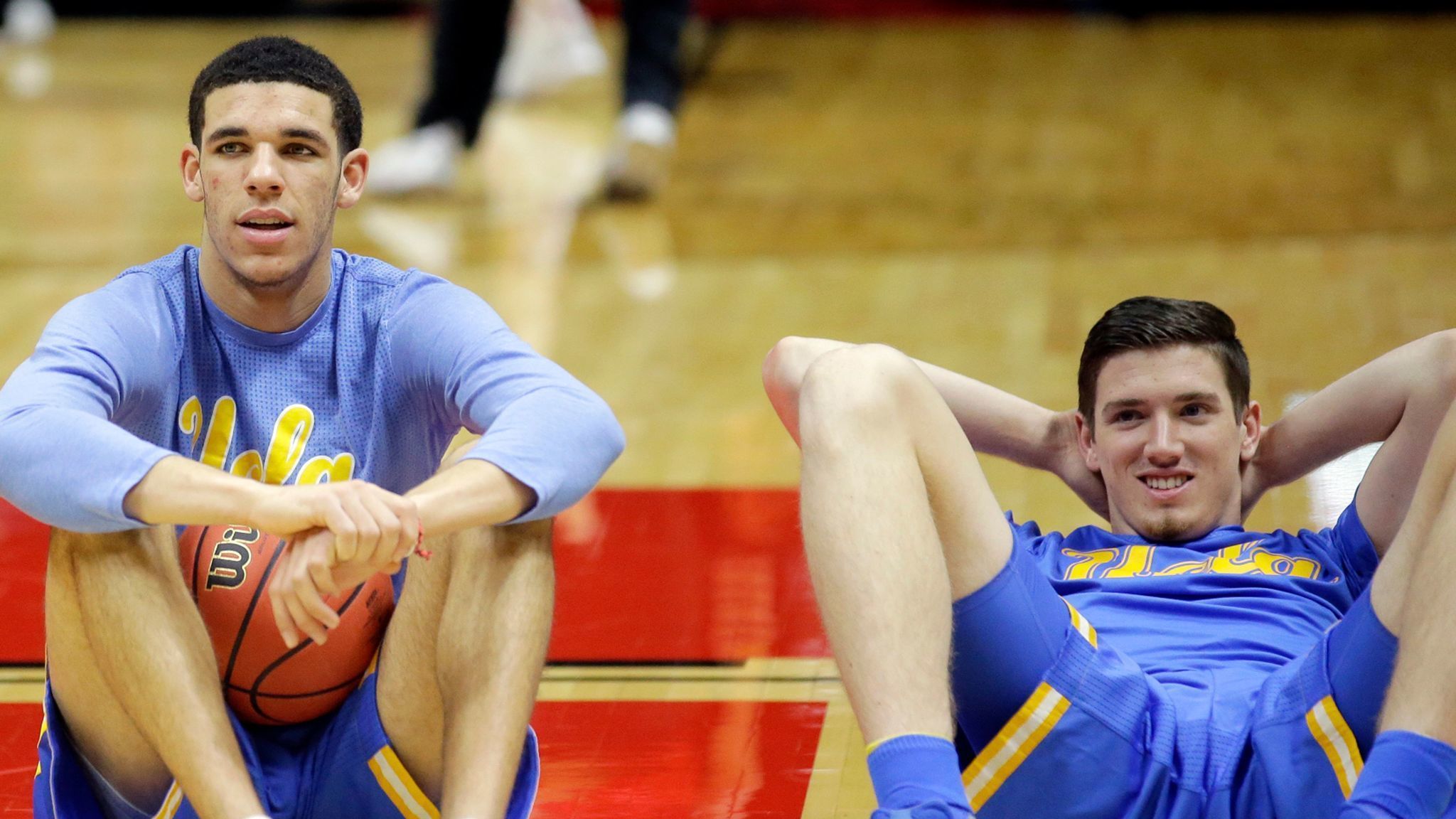 Theres no hiding it, UCLA is one of the most cohesive and tight team that I’ve seen at least when you look at the bigger program teams in the NCAA. I’ve never once seen Lonzo show any negativity towards his team and vice versa and I’d like to see if theres another team in college basketball this year with the same comradery. The single biggest reason for this togetherness is a bi-product of Lonzo’s high basketball IQ, unselfishness and overall generosity towards the goal of team success.

Lonzo does this almost to a fault, where at times his passing can be so generous that it becomes over-passing in spots. With scoring being celebrated on such a high level by todays basketball generation, what players (other than Lebron James) can you honestly say that you enjoy watching them pass the ball as much as score. Lonzo has the potential to be coupled into this bizarro world that parallel’s a similar collective that love defense. Already Lonzo is likely to arrive into the NBA with the point guard passing skills that is slowly being phased out the leagues deepest position as scoring becomes a huge focus, a talent only barely being kept alive by point guards like Chris Paul and Tony Parker.

Basketball is so much easier when the team is clicking together and nothing creates that bond quicker than ball movement, which is something that UCLA was sorely missing prior to Lonzo’s arrival. In basketball there is no such thing as an average passer, your either a good at moving the ball or your turning it over, and so far Lonzo is in his own world when comparing the rest of the field in college basketball.

So the quirky shot and crafty passing aren’t getting you pumped up enough to watch Lonzo Ball yet? If defense is important to you and you refuse to give the time of day to player that doesn’t play it then you may be disappointed just a tad. However, I urge you to not give up completely because there’s always a glimpse of brilliant defense when Lonzo decides to go for it.

Much like his reliance to score, he is by no means expected to display exceptional defensive skills other than guarding the opposing point guard in front him. For the most part, Lonzo has held his ground against most opponents where he’ll come up with steals, deflections and even some amazing blocks where his athleticism is on display. However, like every player he has his faults and it occasionally gets exposed when he matches with someone who can match his speed and athletic ability.

His awareness like most other parts of his game are an attribute of acute basketball IQ, and his defense is a great example of this when being the point guard and racking up blocks that aren’t usually made by players at that position. Lonzo does this in various situations whether it be on defensive rotations or isolation as well as in transition.

Skills like these don’t come along everyday and they are rarely embodied within a player who runs the point, with height of a shooting guard, incredible speed and control, ball handling etc. I could go on, but it’s one thing to say that a player has a little bit of this or a little bit of that and yet Lonzo appears to have internalised these skills entirely rather than showing occasional quick flashes.

So is the hype real after all? Until he hits the league that question will follow him like alot of other top 5 projections and while it usually works out, theres no shortage of stories that stress the overwhelming growing pains when adjusting to the professional level. In the meantime however, why not watch one of the most entertaining college players in the last few years and see for yourself if Lonzo Ball truly is the real deal.